Doing a security audit for your infrastructure, web site or services whether it be annually or every six months is a great first step to better securing your systems, but in many cases it is not enough.

Adding to that, if the audit only involves one tool, our attack surface unfortunately is pretty small.

The idea of this post is to tell everyone about how to use the Faraday platform to be able to do continuous scannings using almost all the auditing tools on the market.

The goal will be to do a scan every week or by events after a set of targets with different tools and obtain all the results on your Faraday platform. This should allow you to detect and mitigate new issues in your infrastructure.

While it is always necessary to conduct regular manual security audits (at least for the time being the software is not better than people). By doing continuous scannings it can help a company pick off a lot of the low hanging fruit and let them concentrate on trickier stuff.

We are going to use the following tools:


Using a set of scripts together with different API we can obtain from a list of IPs/ Websites the corresponding reports.

Each report must be copied to $HOME/.faraday/report/[workspace_name]

Faraday than will convert all the reports into valuable information to be interpreted by the user.

The following script will centralize all the actions we mentioned before.
./cscan.py: #execute each script inside ./scripts/network/ and ./scripts/web/

The following is the nmap script
./scripts/network/nmap

Before starting to use it, review ./config.py as it contains specific configurations that can change your system, some include the path of the tools, openvas/nessus credentials, etc.

The last step is configure how reguarly you are going to run the tool.
A simple example would be using cron each day at midnight executing the tool and moving the reports to the workspace "workspace_name"

Another option is to configure the scripts with Jenkins and we would be able to set up different configurations with events do the scanning starts. An example would be each time a new merge /  release is done there it will be a scan of the web site or specific IP,

Each time a report is incorporated this will include only the new information. Using tags we can categorize the vulnerabilities where it is necessary to focus our attention.

1) In the image below we can see our first import from Nessus. 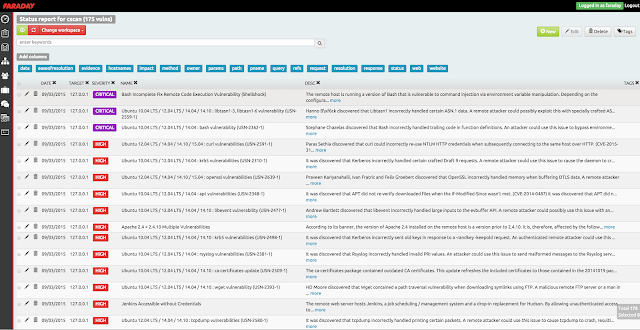 2) In the second image we tagged the vulnerabilities, as a real vulnerability or a false positive. 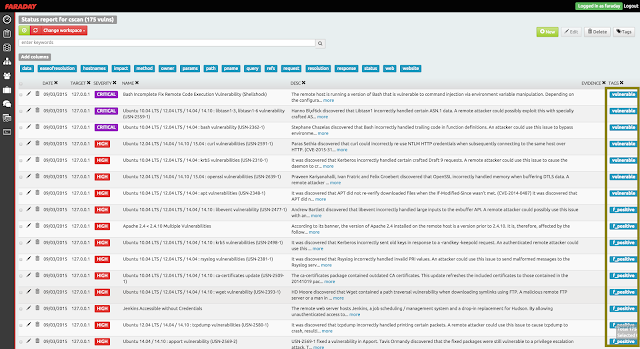 3) Finally in the last image we loaded a second Nessus report and here we can observe the new vulnerabilities. 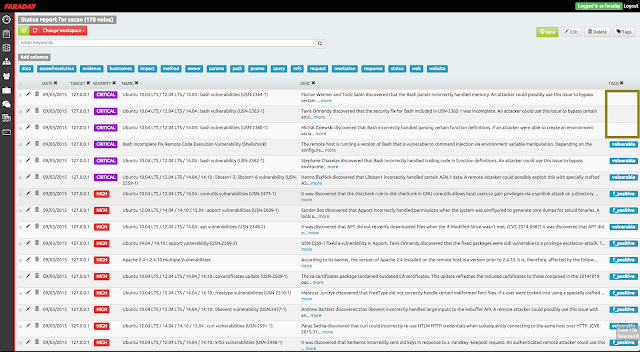 This continuous procedure lets a company have an expanded vision overtime of their infrastructure.

You can find the code on Github:
http://github.com/infobyte/cscan

*For burp it is necessary include the plugin plugin/carbonator/carbonator.py, it has some modifications to adapt it for our implementation.

To add more tools and to improve the detection of errors of the tools.

We are really looking forward to hear your recommendations, questions and pull requests!