Last week a Trojan appeared on the news, named FinFisher is being sold exclusively to law enforcement and intelligence agencies of different nations for monitoring PCs and mobile devices. 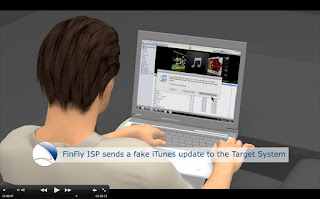 What is so interesting about FinFisher?
It uses as an infection vector, fake updates in the iTunes application exploiting a vulnerability that I reported in 2008 and interestingly Apple three years after on November 14 published patch to solve it.

Two blogs covered this story in depth, I recommend you to visit Seguridad Apple & Krebs on Security who were reporting on the matter.

And the Java update?
On the same day that Apple was alerted about the problem, I did it with SUN with the difference that they published a patch on December 3, 2008. In early 2010 I discovered that it was possible to bypass the restrictions of this patch. Their first update system worked like this:

1) The updater requests in a insecure way the file java.sun.com/update/1.6.0/map-m-1.6.0.xml, this is done using HTTP. This is the content of the file:

2) The updater compares it's version with the tag <version>, if it's a newer release, it downloads the file defined in <url> then the user gets a notification regarding a new update available.


4) If the user confirms the update, the binary set in the <url> tag will get downloaded, if it's signed by CA it will be executed, if not the user will have to confirm the execution.

After the 2008 patch, SUN kept the same update implementation using HTTP with the exception of one more validation step.

5) Before executing the file it compares that the binary is signed by SUN...

To bypass this restriction we send the Java Web Start (javaws.exe) binary as payload and since we can control the arguments with the tag <options> we put an address with a JNLP under our control & Bingo!

The following video demonstrates the vulnerability:

While there was not an a initial contact with the company, shouldn't they do their homework and learn where researchers publish our work?
Or should we wait for FinFisher 2.0 release so they are forced to patch it?

Think about it...
Cheers!